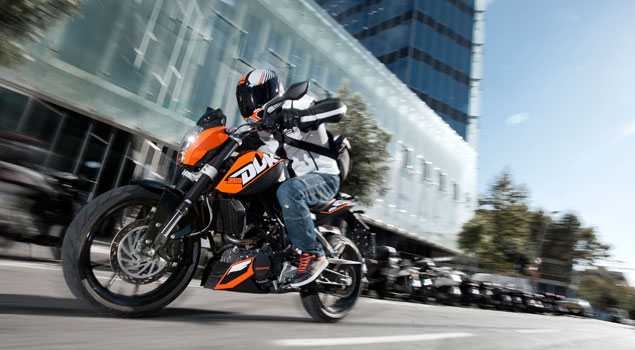 Recently, at the 2011 EICMA Motorcycle Exhibition, the specifications of one of the most anticipated bikes of 2012, the KTM Duke 200 were revealed. Interestingly this bike will make its Indian debut soon via Bajaj Motorcycles. Bajaj owns a good 39.3 per cent stake in KTM. Eventually, it is expected that most of the KTM bikes will make their way to India The KTM Duke 200 will be first shown to the Indian bikers at the 2012 Auto Expo to be held in January 2012, after which it will be launched.

According to KTM’s official webpage, the Duke 200 will come with a liquid cooled, 4 stroke, fuel injected 200cc engine mated to a 6-speed transmission. 25PS of power is expected. The ultra short stroke engine will ensure that the Duke 200 is an eager beaver as far as revs are concerned. The kerb weight is 137kg, which makes it lighter than even some 125cc machines in the Indian market. Expect nimble handling and rider friendly dynamics.

For optimal handling and a fun to ride characteristic, KTM-Bajaj has lowered the center of gravity by using an underslung exhaust system. At the rear is a directly mounted monoshock while upside down forks do duty at the front. A 4 piston 300mm disc at the front and 230mm disc at the rear provide stopping power. The disc brakes are manufactured by a sub division of Brembo. The OEM tyre manufacturer for Duke in India will most likely be MRF, considering how they are a favourite with Bajaj. The fact that the Duke 200 is manufactured in India and that Bajaj has till date been well known as a low cost bike manufacturer, will ensure that the Duke 200 comes with a very competitive price tag slotting it between the Yamaha R15 and the Honda CBR 250R. We are expecting a price between Rs 1.2-1.4 lakh.

There is no word on the technical specifications yet but considering the Duke 125’s healthy 15PS it’s safe to assume the 200 will produce about 20 odd ponies, with some reports claiming as much as 22-24PS. But wait and watch we shall have to. What we do know is that considering the bike’s street credibility it will have a healthy torque curve which should make ideal to breeze through traffic. Expected technical specifications of KTM Duke 200.